﻿Brian O’Halloran ﻿
﻿With his first film role playing Dante Hicks in Kevin Smith’s independent cult classic “Clerks”, it is a role he is most known for. Brian has worked with some of the film industry’s best in “Mallrats”, “Chasing Amy” “Dogma”, ‘Jay and Silent Bob Strike Back”. He voiced the role of Dante for the animated series “Clerks“ on ABC. He starred in the title role of Bryan Johnson’s very dark comedy “Vulgar”. He owned a flower shop for the demented in the film “Drop Dead Roses”. He tackled the role of a former TV superhero in the film “The Junior Defenders”. Brian returned to the role of Dante in the film sequel “Clerks 2” Brian was seen recently in M. Night Shyamalan’s “The Happening” and the film “Brutal Massacre” a mock-u-mentary look at the making of a horror film. He can be seen in Kevin Smith’s Smodcast Pictures release of “Miss December”. He was last seen on TV on AMC’s “Comic Book Men”﻿

HERB TRIMPE Original Wolverine Artist - Herbert "Herb" Trimpe is an American comic-book artist and occasional writer, best remembered for his work on The Incredible Hulk and credited with the co-creation of the X-Men's Wolverine in the early 1970s. Trimpe joined Marvel Comics in 1967 and stayed until 1996. He was laid off when Marvel went bankrupt, went back to school for his master's degree, and taught art at a rural middle/high school for two years. He occasionally takes on comic-book projects. 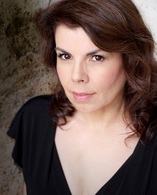 ﻿MARILYN GHIGLIOTTI﻿ Best known for her role as Veronica in the 1994 cult classic Clerks, Marilyn Ghigliotti discovered her love for acting while searching for a creative outlet after a divorce. Born in New York to Puerto Rican parents, Marilyn grew up in places as varied as New Jersey to Puerto Rico. She initially pursued a career in cosmetology after graduating high school. But in 1988, Marilyn began studying at The Actors Training Institute located in New Jersey in the techniques of Stella Adler, Sanford Meisner and Lee Strasberg. She followed her studies there with time in community theater where she performed in such productions as Crimes of the Heart, Same Time Next Year, Wait Until Dark and may others. 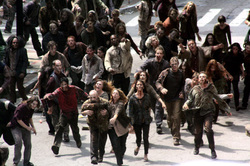 We also have had many walkers from WALKING DEAD as Guests! Michael Jaegers, Mike Mundy, William Hart, Dan Riker, Don Teems, Mark Teems, Michael Koske, Christoph Vogt and Mike Mundy .
They all have had memorable scenes. 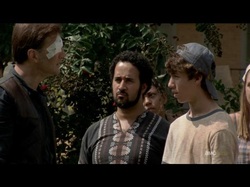 Parker has most recently appeared on The Walking Dead as “Noah”, the asthmatic teen boy in Woodbury under Karen’s (Melissa Ponzio) care as  well as several semi-featured parts in other TV series. Breaking from his busy schedule, Parker has agreed to attend the Comic Con to meet his Walking Dead Fans.


For More Info go to: https://www.facebook.com/parkerwierling 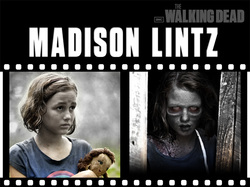 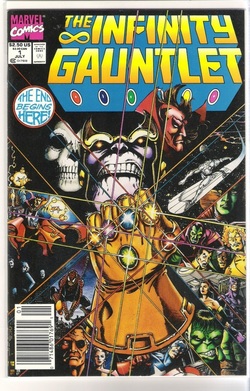 George Perez is a legend among many comic artists. He's been in the business for over 30 years and has worked on such titles such as, The Avengers, Batman, Infinity Gauntlet, Teen Titans, Crisis on Infinite Earths and many more. 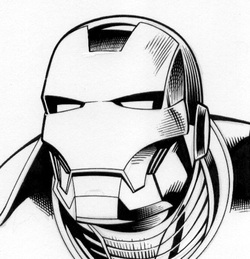 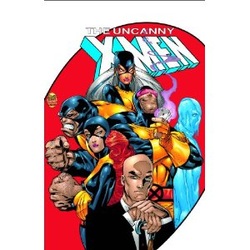 Eisner Award winner Joe Pruett has worked in the comic book industry as an art assistant, a letterer, a writer, an editor, a creative director, a designer, and, ...finally, as a publisher. He has written over 100 titles, including his own KILROY IS HERE series from Caliber Comics and stints on Marvel Comics' X-MEN family of titles.
To find out more follow this link:
http://en.wikipedia.org/wiki/Joe_Pruett 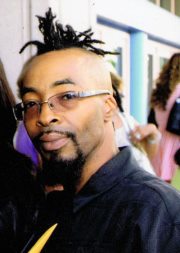 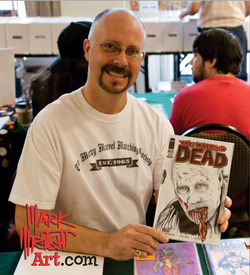 Mark is a local Georgia artist who has
completed pencils, inks and colors for
Cult-Stuff Card Company's "H.G.Wells: War of the Worlds"
card series.
Unpleasant Dreams/Marty & Boo Cards
gave him a start on their "Brittania" original card series.
Mark is also known for his freelance artwork and is always available for commissions.

To find out how you can own some of Mark's artwork, please click the photo or go to the link below:
www.markwrightart.com 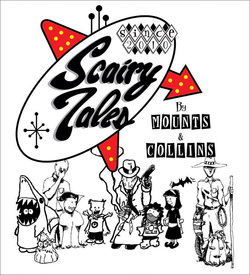 J.R. Mounts  and Christopher Collins reside near Atlanta GA where they have created their own comics for Scairy Tales Noir since 2010. Beginning with their ‘Scairy Tales’ comic strip (think “Calvin & Hobbes meets Nightmare Before Christmas”) and continuing with a pulp crime parody,’Fried Pickle Noir’ (think “Sin City meets Veggie Tales”) they do it all for the fun of it and are constantly creating more fun projects like ‘Family Mal-Use’ and ‘Death by Baby’.Their website and Facebook for Scairy Tales Noir offers comics,coloring books,stickers, greeting cards & more! 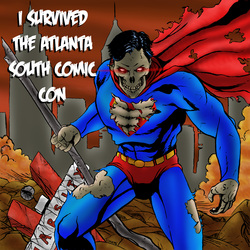 Jason Flowers is an American Comic Book
Artist currently residing in Atlanta, GA.
He has worked on sketch cards
for Alterna Comics. Other works of his
have grazed the pages of Arcana Comics,
215 INK, Horror Hound Magazine, FC9 Comics,
Black Thumb Press, and Octa-Ink Press.
He also designed the artwork for our ComicCon T-SHIRT! 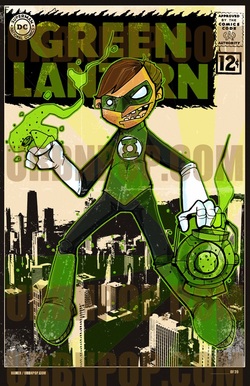 Chris Hamer aka Urbnpop is an imaginative illustrator, painter, and comic book artist who is driven by an incredible passion for self-expression through art. His works are often noted for their unique style. Chris has developed an innovative style that blends Modern Street art withComic Books and Cartoons and crosses it with Folk Art.  His Paintings have been featured in galleries, and Comic book, Horro, and Sci-Fi Conventions across the nation. This year marks the release of a new comic series called Pink Noise.
To find out more follow this link:
VISIT ME ON THE WEB-  www.urbnpop.com
BUY URBNPOP ART @ http://www.etsy.com/shop/urbnpop
FOLLOW ME ON TUMBLR- http://urbnpop.tumblr.com/ 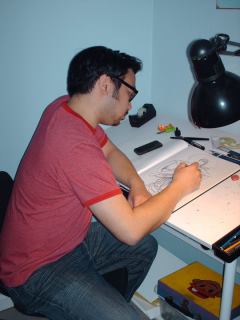 Self Published Rodney Rodis
Check out his stuff here:
https://www.facebook.com/rodneyrodis 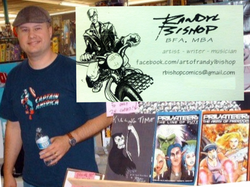 Alterna Sketch Card artist, Artist on Privateer, and FoxHammer Games Paradigm: Necropolis lead artist Randyl Bishop resides in Augusta, Georgia where he is a contributing partner with Lunar Works and consultant for Studio Fizzy. He is currently working on his first graphic novel The Hawk of New York, a coming of age story of punk rock, Indian magic, love, death and motorcycles." 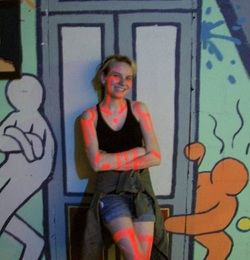 Meg is a struggling comic book artist that lives on anger and the tears of small children. She is an elusive creature but can occasionally be lured out of hiding by a good mocha. She was raised by a box of dollar bin comics and thrown out when they realized she would never grow into a limited edition holographic cover like they had hoped. Now she draws cartoons and paints constantly in an awkward attempt to regain their affection.
www.damn hipsters.com 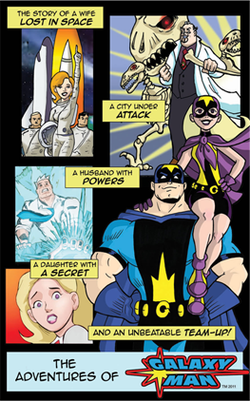 The CREATIVE TEAM OF .... GALAXY MAN!
Our story is about a humble astronomer, Stanley Quest, who's astronaut wife becomes lost in space.On that same fateful night, he gains incredible powers when a meteor strikes his observatory!Now he's desperately searching the solar system for his lost wife Amelia!
While exploring a comet that struck Mars, Amelia and her crew go missing! What mysterious forces have taken Stanley's beloved wife?
Galaxy Man watches over Stellar City and searches the night skies for clues.Approaching dangers from outer space distract him from his true mission!
Joined by the mysterious young side kick, Cosmic Girl, he fights dangers both in space and on earth. He is... GALAXY MAN! www.galaxymancomics.com 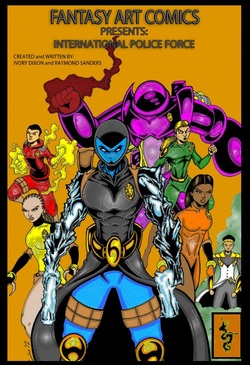 Creator of Fantasy Art Comics,
Fierce, and co-creator of the
International Police Force
(I.P.F for short).
Co-creator of Avengence.
www.fantasyartcomics.blogspot.com 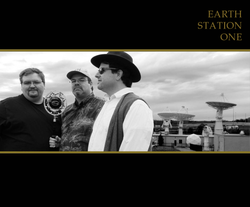 Earth Station One
The ESO Network is the podcast network home of shows that celebrate our love for all things Pop Culture, Sci-Fi and Fantasy, Comics and much, much more.
Join podcasts like Earth Station One, Earth Station Who, Dr Geeks Lab for Applied Science, Transmissions From Atlantis, The White Rocket, The Thirteenth Hour and The Delta Quadrant (more shows to come) as they dive headfirst into the world of their favorite topics, and see what trouble they can find to get into! Stop by for a listen and let your inner geek out to play.
The ESO Network proudly serving you since April 2010.
To find out more follow links below: 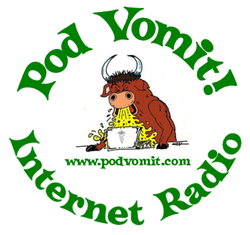